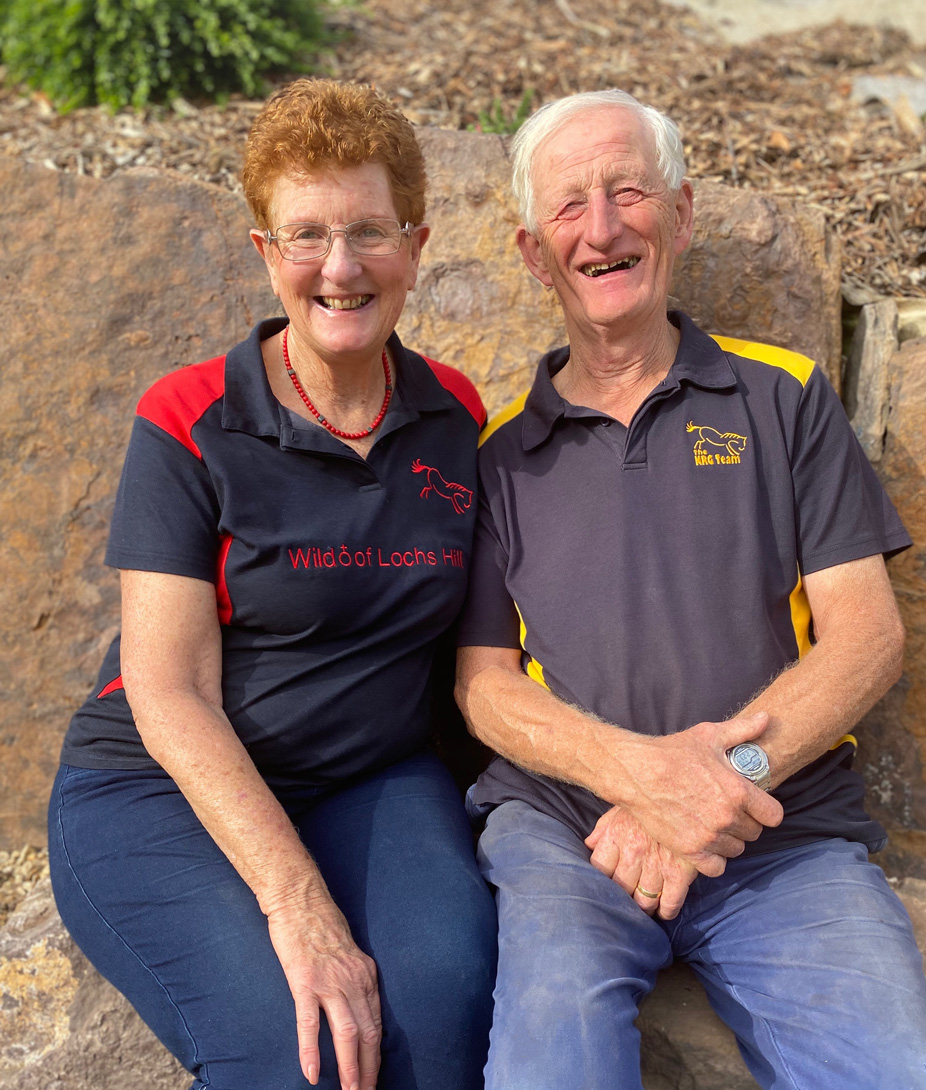 Boyce is old enough to have grown up with ‘working horses’ in Ireland and has sustained his love for horses ever since.

Moving to Australia in the late 60’s, Boyce continued to ride horses although he did meet his other love in life, Glen. She too was introduced to horse riding, however, being a qualified nurse, Glen disappeared to work in far North QLD not long after they met. Boyce wouldn’t let up and pursued her until she finally gave in to his charms, and a year later they were married.

Playing Rugby Football consumed any spare time Boyce had and now, years later, the rugby injuries are all that remain while he is still enjoying riding his beloved horses!

It takes a lot of hard work to become one of Australia’s finest equine product manufacturers. And if you asked The NRG Team’s founder Boyce Deverell, he’ll tell you that hard work is only just the beginning.

It all starts with a passion for horses. For Boyce, his passion was born on the family farm set amongst the rolling green hills of Ireland where horses were part of the family. From carting hay and ploughing the paddocks during the week to fox hunting on the weekend, his family relied heavily on their animals to perform day in and day out. Healthy horses simply became a way of life.

Growing up on the farm also meant that young Boyce quickly learnt to apply his hands to almost any task. If you wanted something made, you made it yourself. If something broke, you fixed it yourself. And it was this self-reliance that not only saw Boyce flourish as a teenager but would eventually fuel his interest to move across to Australia to write the next chapter in his story ’Down Under’.

It was no surprise that this canny young Irishmen soon found himself setting up a saddlery at the gateway to the Yarra Valley in Melbourne’s outer east. Boyce was in horse heaven. With a young wife and three kids in tow, life was very busy keeping up with saddle fittings, rug repairs and moving his first retail shop from Coldstream to a new site in Lilydale. He still managed to hunt and always found time to teach his young brood all he knew about ponies and horse care. But something bothered him. Boyce felt there had to be a bigger project that could harness all the experience and ideas he had swirling around his head. And it was right under his nose all along.

Every time Boyce stocked the shelves in his shop or had a supplier on the phone, he became more inspired by the idea of making his own equine products. Whether he was in the paddock instructing his kids or mixing the feeds for his beloved hunters, he knew there was an opportunity beckoning. So, he began to experiment. A few batches here, another several mixes there, and things started to take shape. Trialling his products on his own horses gave him instant feedback. And soon enough his friends and industry colleagues were all lining up for trial runs. For Boyce, there was no tolerance for error. Each product simply had to work.

This approach to quality saw Boyce’s emerging business flourish. Many long hours in his modest factory in an old dairy shed in Gruyere resulted in even more product developments and subsequent orders around Australia. And his satisfaction levels were two-fold. Apart from operating a thriving small business, he was also able to enjoy a love of horses with members of his own family. Many a conversation was had leaning up against the hitching rail chewing over ideas or testing new products on the family horses with at least one of the junior Deverell’s’ around for feedback.

Now after nearly 40 years, you would think Boyce is happy to put his feet up and enjoy a slower pace of life. But nothing could be further from the truth as he still has a handful of new ideas on the go and a third generation of keen horse riders under instruction. No longer hunting, he regularly competes in HRCAV events on his beloved New Zealand mount Finn and can never be found too far away from his own little slice of Ireland tucked away in the rolling green hills of the Yarra Valley.