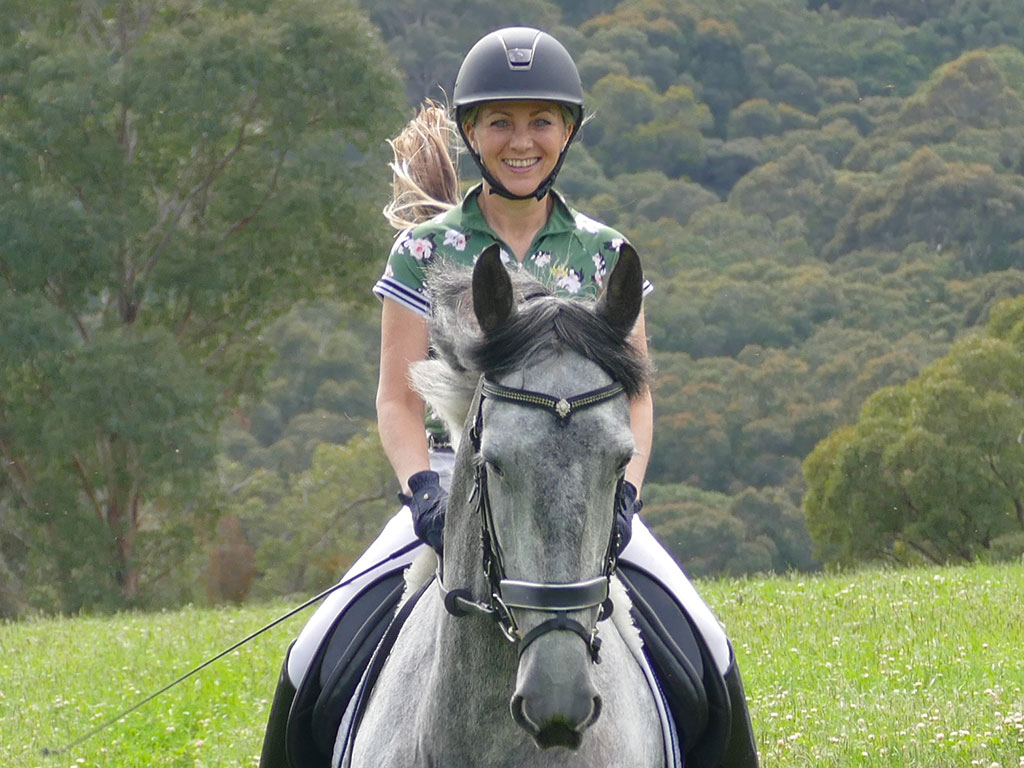 Having a grandfather with a passion for training racehorses and mother following in these footsteps, plus show and dressage riding, it comes as no surprise that Kylie was riding horses before she could walk.

As a young teenager, following her mum’s enthusiasm, Kylie absolutely loved trackwork and all the hard labour that went along with it. Whilst working the horses on the track Kylie also had the chance to train them in Show jumping and Dressage. She believes this not only helps them with their performance on the track but also gave them a solid foundation for life after racing.

In recent years, Kylie attended a clinic here in Australia with Frederico Schiappa Pietra Saramago from Portugal. Travel is something Kylie loves to do and when Frederico invited Kylie to his stables in Portugal to train under him, she was quick to accept his offer. Since then, she has been over to Portugal twice, visiting well regarded stables/trainers in Spain and even given the experience of riding some of their amazing horses. These horses ranged from freshly broken to Grand Prix level. Frederico later travelled to Australia, holding a 5-day clinic at Shirley Heights Equestrian Centre.

A hard worker, Kylies Day starts early and consists of riding five plus horses each morning, followed by coaching in the afternoon & into the evenings. Add to this the managing of the Equestrian Centre and organising competitions, there is not much down time to do what she loves most and that is spending time with her parents, grandmother and twin daughters Paris & Sydney. Not forgetting her best friend Duke, a Ridgeback X Shar-pei.

She grew up on the property with her parents, Denise & Fred Broxam and from the age of two, her dogs, horses and motorbikes were her life. Kylie tells us her childhood was nothing short of amazing and all her friends loved coming to visit “the farm”.

Shirley Heights Equestrian Centre was Established in 1987 in Gladysdale and was purposely built as a private equestrian facility by Kylie’s mother, Denise Broxam and late grandmother, Patricia Peacock. Now this idea did not last long as Denise soon begun coaching seven days a week and ended up with sometimes 45 agisitees! Some years later, Kylie and her late auntie Donna also taught at the equestrian centre.

It was a great business, and they welcomed many riders and friends from all over. It wasn’t long before they began holding competitions which included Hickstead Derby Days, Two Day Eventing and Dressage competitions ranging from beginner levels right through to Grand Prix.

Kylie explains, “We have grand plans heading into the future for this unique equestrian centre nestled in the beautiful Yarra Valley and we believe it will be a huge asset to all equestrian enthusiasts.”

When asked about her favourite NRG Product, Kylie says that she couldn’t live without her NRG No-Nots and the Proplaits simply makes her competition preparation so much quicker and easier! All her horses love their NRG Stockgain and the Stride Hoof Dressing is fantastic, especially over hot, dry summers. “Actually,” she says, “I love all the products, so please don’t make me choose just one!”